5 Days in London: Highlights From My Adventure

I’m back in the states and have finally compiled some of my photos, experiences, and tips from my trip to the United Kingdom. First of all, London is a huge city with so much to offer. I would recommend spending at least a few days here because you will find it difficult to fit all of the city’s famous landmarks in, trust me I tried! If I had more time I would have made a day out of visiting Stonehenge or Windsor Castle, a short distance from London. Nevertheless, I feel as if we made the most out of our trip and knocked off a lot of things off my UK bucket list!

One of my favorite days in London included a visit to Camden Market, the Canal Walk, London Zoo and Regent's Park. The best part about this sequence was that everything was close together and walkable!

There is something for everyone here with plenty of craft, food, and clothing stalls to explore, but the best part for me was all the food options! Most booths included examples of their food so I found myself walking around gaping at how large the sandwiches were and how delicious the desserts looked before making my decision. I knew before coming here that I wanted to pay Chin Chin Labs a visit, so I made sure to save room in my belly for their ice cream frozen with liquid nitrogen. Pictured below is the "Killer Marshmallow Cone" with burnt butter caramel ice cream. When visiting the shop, you feel as if your in a chemistry lab. The ice cream scientists make your concoction in front of you with smoke pouring out the sides of the mixing bowl while another torches the marshmallow onto your cone.

From Camden Market you can walk alongside the canal to the London Zoo. I enjoyed this scenic walk as it wasn’t too long and had paddle-boarders, guitarists and houseboats to look at while passing through.

You can spend a lot of time at the London Zoo. We didn’t make it to every exhibit due to how large it is, but some of my favorites include the butterfly and squirrel monkey walk-through experiences. Its quite a sight to see little monkeys jumping around you in the surrounding hedges and trees without the big black bars of a cage blocking your view. 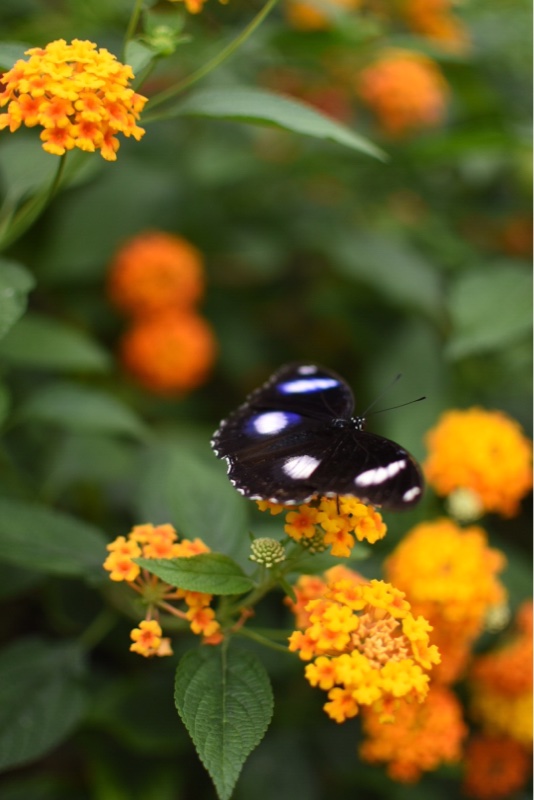 Located in the northern part of Regent’s Park, Primrose Hill is a short walk after your visit to the zoo. Once you get up to the Hill’s summit you can see a great panoramic view of the city skyline including the Shard, London Eye, St Paul’s Cathedral, and House of Parliament. Personally, I would rather go here to take in the city’s view than the Shard. This view displays the natural beauty of the London landscape without a time consuming and expensive trip to the Shard.

Regent’s Park is a beautiful walk with a tree canopy over the main trail making a natural tunnel, it looks like a scene right out of a movie. Besides the vast lawns, the park also contains Queen Mary’s picturesque rose garden with flowers of almost every color. 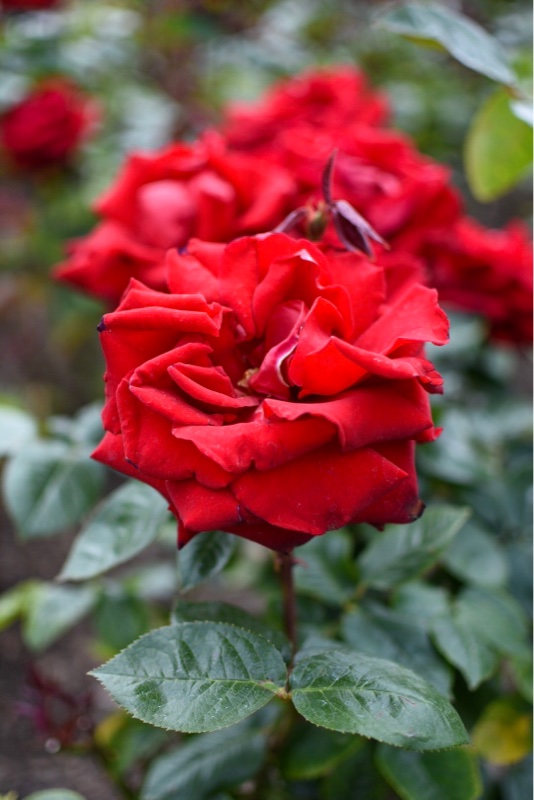 This plaza is home to the Royal Opera House, fashion stores, crafts, and restaurants. We came in the evening when most of the vendors were closing up shop, but we had the pleasure of seeing some A+ street performers such as an opera singer, knife juggler, and a skilled Charlie Chaplin impersonator.

We booked a tour through TripAdvisors beforehand with a tour of Oxford and access to the Warner Bros Studio Tour London - The Making of Harry Potter. Oxford’s architecture is very reminiscent of Hogwarts and some shots of Harry Potter were even filmed there. The courtyard outside Hogwarts where Professor Mooney turned Malfoy into a ferret is in Oxford, but it does cost money to get in. Despite a lot of the Harry Potter film locations being monetized, Oxford is still an amazing place to wander around.

The Warner Bros tour was brilliant! The studio was huge and took us about 3 hours to get through, and I’m pretty sure we skipped through some exhibits. Even if you aren’t a huge potterhead, the tour is very interesting and exciting as it has the real props, costumes, and sets used in the movies. I was amazed at how much detail and work went into creating the wizarding world.

You may know King's Cross Station from where Harry Potter gets on the Hogwarts Express via Platform 9 3/4. The legendary spot is not actually between the platforms 9 and 10 like you might expect, instead it is nearby a Harry Potter store with a cleverly organized photo shoot location. Outside the station is a small food market with mouth watering bread's and treats like the Crosstown Doughnuts we grabbed in the photo below. After stopping at the station, you can walk over to The British Library close by to see a number of books and manuscripts on display. The collection includes works from the Beetles, Beethoven, Shakespeare, Lewis Carroll and so much more.

Tower of London and Tower Bridge

The Tower of London is a historic castle located next to the River Thames in central London. The biggest draw to visiting the castle is to see the Crown of Jewels. Thankfully, they put moving walkways next to the display to avoid people crowding around. I went through twice to get a glimpse of the magnificent gems on both sides.

The Tower of London is beside the Tower Bridge, another famous London landmark. With the London Pass we were able to go up inside the Tower Bridge and walk along the glass floors that give you a bird’s eye view of the River Thames below. The pass also lets you into the Steam Engine Rooms that feature the bridge’s original coal burners and steam engines that once powered the raising of the Tower Bridge.

Later in our trip we took a hop on/off river cruise down the famous River Thames. We didn’t utilize the hop off feature since it was one of the last boats of the day, instead we opted to ride all the way to Greenwich from Westminster and check out the sights. We were lucky enough to catch the Tower Bridge opening, something that has become a rare sight to see. The bridge used to open on average 17 time per day during its opening year back in 1894 but now it only opens on average 2 times per day.

This museum was right up my husband’s alley as it had tons of rocks and minerals to see. I was happy to find a little shout out to our homeland in one of the exhibits, as some rare mineral cluster came from Minot, Maine. We didn’t look through the whole museum as it’s very large and we had limited time, but I can say the rock and dinosaur section is pretty cool!

One of the things Notting Hill is known for is the Portobello Road Market, the world's largest antique market. Sadly I visited this area of London in the evening when everything was closed. My husband and I tried searching for the famous pastel-colored buildings popularized on Instagram, but we we weren't entirely sure where they were. Despite meandering around aimlessly, it was still a fun walk as the sun was setting and I got to snap a picture of the iconic Churchill Arms pub below!

London is a beautiful city with so much to do. In our five days, I feel as if I didn't even scratch the surface of all the city has to offer! If I had to live in a major city around the world, I would choose London. Although a large city with attractions too far spread out to walk, the public transportation is very affordable and easy to navigate. Also, London has countless beautiful areas and many parks and gardens, at times you forget your in one of the largest cities in the world. All in all, I had a great trip to the United Kingdom and will be looking forward to returning someday.

5 Tips for Your London Trip

It always seems as if you get the hang of things on your last day. Here are some tips I would like to share with you in the event that you also decide to cross the pond.

An item you should have when planning a trip to London is the London Pass which will fulfill all your tourist needs. It gets you access into different museums/tours and comes with an Oyster Card for public transportation. You can buy all these things separately of course, but having these two cards makes your touring easier!

One of my most crucial tips is to bring comfortable walking shoes! This might be obvious but I considered bringing sandals on my trip to sacrifice comfort for fashion, but it’s really not an option when you have so much too see and do. You will be on your feet a lot, from standing in museums to walking to and from different locations. Fortunately, London’s transportation system is easy to manage, so use the buses and the tube (underground railway) whenever you can to alleviate some of the walking pains.

We bought a SIM card with 10 GB of data so that our phone would work in the UK for 15 pounds each (roughly $19 USD). This means you can use Google or Apple Maps to navigate your way to the next place. I would simply type in where we wanted to go and follow the transit instructions to find the correct bus to jump on. Also, having phone access was important for communication, allowing my husband and I to split up from our group to occasionally do different things. Having a working phone takes the stress away from being stranded somewhere!

This probably goes for any travel destination but you must plan your itinerary with care. Depending on how much time you have to spend, you will most likely have to forego some places. I regretfully didn’t make it to Portobello Road Market or the Chelsea area of London and potentially much more. When putting together your trip’s agenda, keep that in mind! Make sure to knock out the things you must-see first just in case you don’t make it to everything.

There are numerous food options in London, but if your ever in a pinch, Pret A Manger and Pizza Express are on almost every street corner. Despite the name “Pizza Express” the restaurant offers a nice sit down experience with delicious Italian food. On the other hand, Pret has grab-and-go healthy items with plenty of coffee, tea, and bakery options.

I definitely suggest getting a bakery item like a scone, croissant, or a savory pie from one of the city’s many cafes and patisseries since their baking standards seem to be a lot higher than ours in the states! If you get anything with a crust, expect to it be buttery and super flaky. Also, if you are a seafood fan you have to try the traditional British dish, Fish and Chips (duh).

A Pleasant Day in Boothbay

A Rockin' Day-Trip in Bethel

A Visit to My Favorite National Park